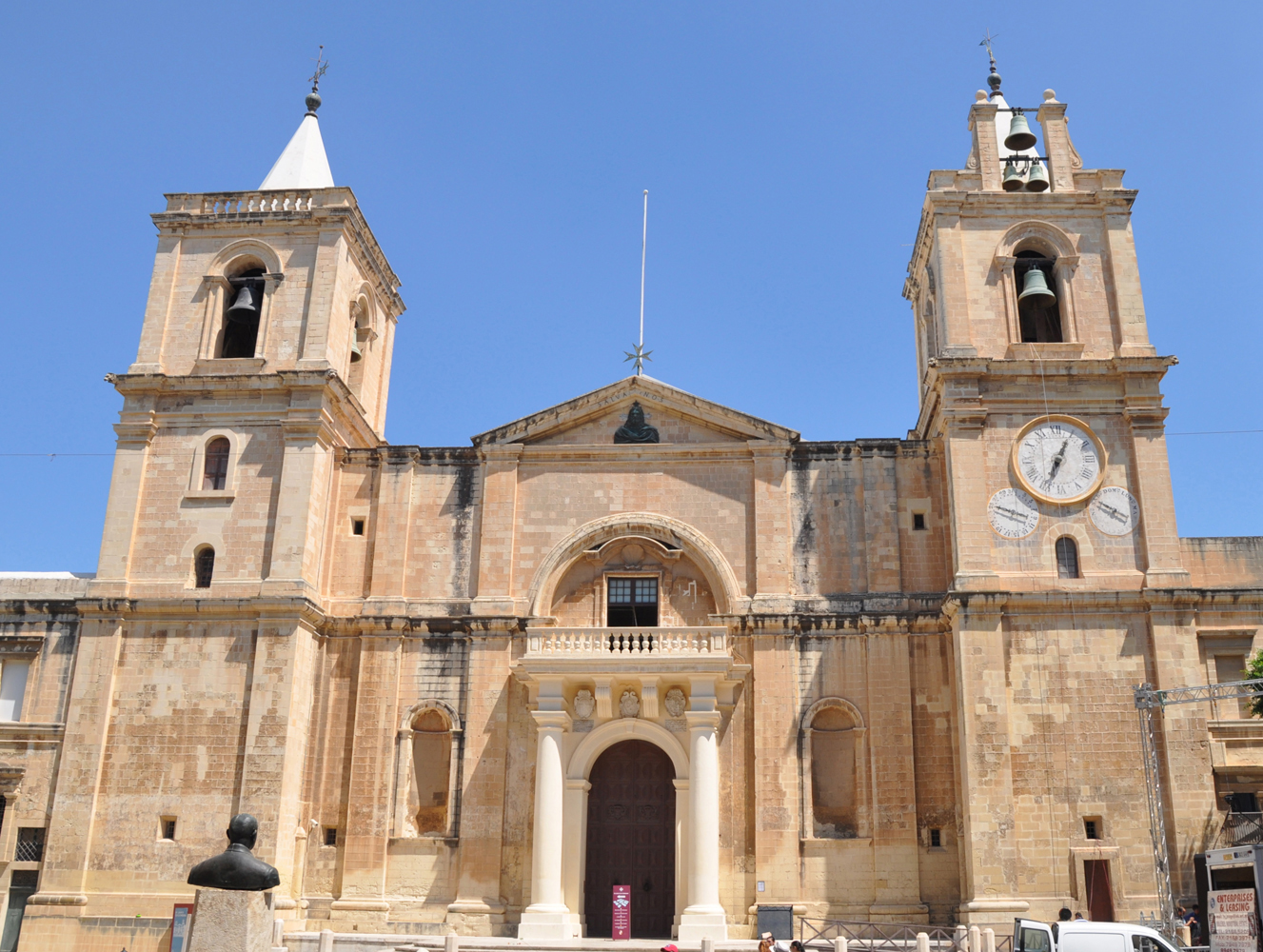 It may not be the only cathedral on Malta, but St. Johns is easily the most fly.

A cathedral is a bishop's home base. The traditional seat for the bishop overseeing the salvation of Malta is in the interior town of Mdina, about 20 minutes away from St. John's environs in Valletta. Pope Pius VII issued a papal bull (law/decree) in 1816 that St. John's in Valletta would be a cathedral on par with the one in Mdina. More on why the Pope would bother with that below.

Originally, St. John's was a church of the Knights Hospitaller, whose goal was to preserve a Christian Europe from attack and conquest by the Muslim Ottoman Empire. Ottoman Turks indeed tried and failed to invade Malta in 1565 and were repelled by the the Hospitallers. The Hospitallers were given a portion of the island's new capital to build a church, which they made sure resembled a military fortress, making it clear to the Turks and Maltese who was in charge in Malta. Part of that plan involved blinging out the church with as much gilding and decoration as possible, but it was an afterthought, really. Which is why the plain exterior clashes so harshly with the decked out inner digs.

The Knights ran Malta for a couple hundred years until Napoleon took over wholesale, at which time Pope Pius VII (who was besties with/a prisoner of Napoleon) "chose" to elevate the not so humble church into a co-cathedral. From Napoleon's hands, Malta and the church fell under British rule and use. Between British ascension and the present, the church as we know it was very nearly destroyed twice: once by a group of Catholic fundamentalists hoping to purge the church of its Baroque overtones, AKA trash the place and start over. Then, during World War II, part of the church was destroyed in bombing raids, but the structure as a whole made it out with only moderate non-structural damage.

Today, visitors are wise to dress "decently." Otherwise you'll be asked to wear one of the cathedral's public shawls to cover up the goods and bits. Malta's a warm climate, so respect on showing off the bod, but the folks at the cathedral just aren't going to have any of that. Also, be prepared to nix your stilettos at the front door in exchange for a pair of slippers available for purchase at the random price of €1.20. Got to protect the marble floors and all. Only 52 souls are allowed in at a time, so be prepared to divvy up into the buddy system if your group is 60 souls or more.

Here is what Wikipedia says about Saint John's Co-Cathedral

St John's Co-Cathedral (Maltese: Kon-Katidral ta' San Ġwann) is a Roman Catholic co-cathedral in Valletta, Malta, dedicated to Saint John the Baptist. It was built by the Order of St. John between 1572 and 1577, having been commissioned by Grand Master Jean de la Cassière as the Conventual Church of Saint John (Maltese: Knisja Konventwali ta' San Ġwann).

The church was designed by the Maltese architect Girolamo Cassar, who designed several of the more prominent buildings in Valletta. In the 17th century, its interior was redecorated in the Baroque style by Mattia Preti and other artists. The interior of the church is considered to be one of the finest examples of high Baroque architecture in Europe.

Check out the full Wikipedia article about Saint John's Co-Cathedral