More about The Antipope 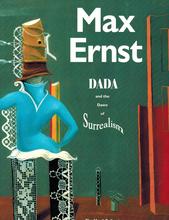 Max Ernst: Dada and the Dawn of Surrealism by William A. Camfield

You can tell this is an Ernst painting because it makes you wonder what kind of bunk stuff your drug dealer has been selling you recently.

Everything looks like a crazy drug trip in the world of Ernst, but perhaps that is due to his countless visits to mental asylums. Or maybe like many artists, he was just a little out there. Either way, it is this otherworldly aesthetic that helped make the movement of Surrealism into what it is today.

It is not by dumb luck that this painting finds refuge in the Peggy Guggenheim Collection. Guggenheim and Ernst were an item for quite some time, and she even helped him escape from Europe during World War II. When asked why she loved Ernst, she replied “Because he’s so beautiful and because he’s so famous.” The basis of any successful relationship, obviously. Sadly, his fame and good looks were not enough to sustain their marriage and the couple ended up getting divorced. Clearly it did not take her too long to get over their love, for it is rumored that Guggenheim slept with over 1,000 men throughout her life. Get it, girl.

But back to the matter at hand. The same year Guggenheim helped Ernst get the heck out of Europe, the surrealist artist executed his first version of this painting. When Guggenheim saw the work, she assumed the horse figure on the right was Ernst and the woman fondling him was her. I told you she had a insatiable sexual appetite. As if this interpretation and the painting are not weird enough, turns out the figure next to them is Peggy’s daughter...just awkwardly standing there while her mom fondles her horse-man lover. Not your typical family portrait, especially when you learn that Peggy might have had it wrong all along. Turns out that Ernst might have been doing the deed with another woman who was totally obsessed with horses.