Skip to main content
Artworks
The Altar of St. John

More about The Altar of St. John

This altarpiece is like an old school graphic novel with plenty of (implied) weird sex and blood and subplots, but you probably know the ending already.

Van der Weyden's triptych that isn't a triptych. That's because you can't fold it up nice and neat like other three part altarpieces on the market. For whatever reason, the three panels are holed up in an elaborate frame. Considering that Rogier made the work for King John II of Castile to give to the monastery he wanted to spend eternity at, you'd think the implication would be for the artist to go all out. This is back when no one debated whether there was a heaven. Their highnesses like John II thought they'd be waking up in some sort of afterlife, and if the Saint John Altarpiece was his way of greasing the wheels to make that happen, I mean, Christ, put a hinge on it.

The altarpiece tells the life of Saint John the Baptist. Bonus features depicting the life of Christ surround each scene, and the turkeys loitering on either side are the twelve apostles. Don't rat that I called them turkeys. Mama Baptist is on left panel, giving birth in the background and naming her not-quite-immaculately conceived pride and joy in the fore. The baptism in the middle was intended as the visual centerpiece and...It's great. Sure. It's an excellent baptism scene. The Monty Python looking God figure speaking a snake of words off the sun is particularly thumbs-up worthy. But the panel on the right with John the Baptist's execution is your show stopper. Mr. Short Shorts in the knee high socks aside, look at 'dem arteries. That neck's like a fountain of Hawaiian Punch. Gratuitous? Check. Mustachioed fella with a sock fetish and a sword? Double check, and an exclamation mark! Panel right has it all.

But, of course, nothing lasts forever. The power trio was broken up when the right panel was stripped from the other two, going off to do a solo project in a private collection. Left and middle panels were shipped as a power duo to London. Before long, they're washed up in the personal collection of King William II of the Netherlands. After Dutch Willie Dos died, Christie's auctioned left and middle panels off to a bidder that instantaneously donated them to the Gemaldegalerie. And which painting did they meet at Germany's ultimate state museum? The one, the only, right panel! And they've been happily on display together ever since.

This is one of three panels of a portable altarpiece which historians think was probably painted for King John II of Castile. John is known for:

1) Assuming the throne at age 1

3) Marrying one of his cousins

4) Having no taste in anything and being easily manipulated

The painting itself is kind of a twofer. You get a scene with Salome and John the Baptist in the foreground, and then there is a bonus scene in the background where Salome seems to be offering up St. John's head to someone just out of view.

Sartle fashion alert:
Salome is wearing a delightful navy blue jacket and matching turban, both trimmed with fur, and a gorgeous burgundy dress, all of which go very well with her red hair and pale complexion. Who wears short shorts?? The executioner does with simple white cotton top, which serve to accentuate his bright mismatched knee high socks. His shoes are comfortable, yet dressy.

Here is what Wikipedia says about St John Altarpiece

The St John Altarpiece (German - Johannesaltar, Johannestafel or Johannesretabel) is a c. 1455 oil-on-oak wood panel altarpiece by the Early Netherlandish painter Rogier van der Weyden, now in the Gemäldegalerie, Berlin. The triptych is linked to the artist's earlier Miraflores Altarpiece in its symbolic motifs, format and intention.

The panels show – from left to right – the birth of Saint John, the baptism of Christ by John in Jordan, and the beheading of John, with Salome receiving the disembodied head on a plate. Each panel is set within painted archivolts, which contain painted reliefs depicting statuettes of the apostles, and scenes from the lives of both Christ and John, with the overall theme of salvation. The faux sculptural reliefs are painted in grisaille, and give the impression that the scenes are set within a church.

There are two extant versions of the altarpiece, almost equal in size, leading to complexities in establishing attribution and authenticity. The version in Berlin is considered the original, that in Frankfurt a near contemporary copy.

Check out the full Wikipedia article about St John Altarpiece

The Altar of St. John is mentioned on our blog - 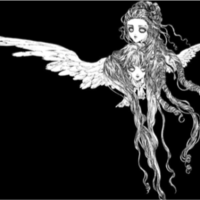