Skip to main content
Artworks
The Allegory of Painting

More about The Allegory of Painting 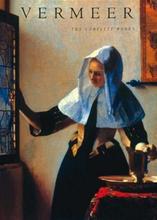 Look! A painting of a man looking at a woman! Something new and different for art!

Obviously that was a joke. The male gaze is as old as time and yet here we are hundreds of years later still doing the same sh*t (hi John Currin). At least The Allegory of Painting is attempting to make the woman look interested in things like music and reading, unlike the creep Ingres who didn’t even care if the women he painted were anatomically correct! The woman in this painting, who has been identified as Clio, the Muse of History, at least seems to have arms and legs where arms and legs are supposed to go.

Anyways, this work isn’t really about Clio. It’s all about the symbols that it hides like a fun little treasure map. First Clio herself is a symbol of inspiration for the painter (yawn), which may be Vermeer himself. The mask on the table in front of her refers to imitation, which is a meta way for Vermeer to point out that this is just a painting, not actually a man painting a woman (maybe Magritte’s The Treachery of Images wasn’t so original after all). Also, the chandelier over the woman’s head has on it “a double-headed eagle, [the] symbol of the Hapsburg dynasty which since the sixteenth century had governed the seventeen provinces of the Netherlands that appear in the map on the end wall.” Neato!

Vermeer was a huge fan of meaningful objects in his painting, which is why it’s no surprise that this was one of his best and favorite works. He never sold it while he was alive, even when he was in debt and struggling to feed his family. The painting was given to Vermeer’s mother-in-law for safe keeping but she misplaced it for over a hundred years. ~Classic~. It turned up around 1813 and was bought for 50 florins by Johann Rudolf, Count Czenin from an Austrian saddlemaker. Then the Nazis got their hands on it (for 1.82 million Reichmark) because it was nothing like those degenerates, Marc Chagall, Paul Klee, Max Ernst etc. And finally it ended up at the Kunsthistorisches Museum in Vienna, despite the Czenin family’s multiple efforts to get back what they believe to be rightfully theirs. But when you mess with the bull (Hitler) you’re going to get the horns (the loss of a priceless work of art).

Here is what Wikipedia says about The Art of Painting

The Art of Painting (Dutch: Allegorie op de schilderkunst), also known as The Allegory of Painting, or Painter in his Studio, is a 17th-century oil on canvas painting by Dutch painter Johannes Vermeer. It is owned by the Austrian Republic and is on display in the Kunsthistorisches Museum in Vienna.

This illusionistic painting is one of Vermeer's most famous. In 1868 Thoré-Bürger, known today for his rediscovery of the work of painter Johannes Vermeer, regarded this painting as his most interesting. Svetlana Alpers describes it as unique and ambitious; Walter Liedtke "as a virtuoso display of the artist's power of invention and execution, staged in an imaginary version of his studio ..." According to Albert Blankert "No other painting so flawlessly integrates naturalistic technique, brightly illuminated space, and a complexly integrated composition."

Many art historians think that it is an allegory of painting, hence the alternative title of the painting. Its composition and iconography make it the most complex Vermeer work of all. After Vermeer's Christ in the House of Martha and Mary and The Procuress it is his largest work.

Check out the full Wikipedia article about The Art of Painting