More about Mao Tse-Tung No. 4

If there’s anyone who could make the staunch leader of the Chinese revolution look like a cross-dressing hooker named “Anna Conda,” it’s Andy Warhol.

The prince of Pop art manufactured prolific amounts of Mao Tse-Tung portraits after Nixon’s visit to China, where propaganda images with Mao’s mug were featured ubiquitously. Though Warhol used the same picture of Mao, each silkscreen print he produced was in effect, totally different.

In some prints, like this one here, Mao definitely looks like a drag queen, with garish pink lipstick smeared outside of his lips even, a beauty mark floating mid-chin and puke green skin, which seems the unfortunate result of badly applied makeup. The result is a not altogether kind caricature of the Chinese dictator.

Warhol’s varied expression of the same essential portrait is kind of like Chinese political ideology itself, i.e. just a constant regurgitation of one guy’s ideas. Though Andy Warhol was much loved all over China, his Mao series has been banned by the presiding powers of the People’s Republic. Even though Warhol’s prints of the revolutionary leader were basically a shout out to Mao’s permeating presence. Still, they were none too flattering to the conservative nation.

Auction houses and galleries might feel differently, though. In February of 2014 one of these Mao prints (colored in the Cultural Revolution hues of red and yellow) sold for £7.6 million. Pooh to you, China! Capitalism rules!

Mao Tse-Tung No. 4 is mentioned on our blog - 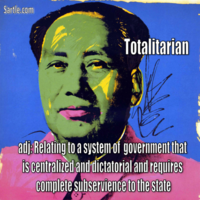