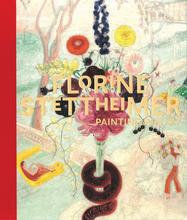 It is Mother’s birthday, 1918, the last summer of World War I. But Florine Stettheimer's New York garden party is thousands of miles from the fires of the trenches.

The biggest problem in this Great Gatsby world is the sweltering heat that chokes the matriarchal Stettheimer clan to the point of swooning.

Rosetta, the artist’s mother and birthday girl, sits at the top, clad in the late-Victorian black she always wears in Florine’s paintings.  Rosetta was abandoned by her wealthy banker husband to raise her young children alone, and the girls lived in an extremely close, uber-feminine circle.  Florine gives us a world of absentee men.  Neither wandering papa, nor Florine’s brother Walter (a San Francisco businessman) attend.  This is a strictly glamazon queendom.

All four Stettheimer daughters are at the party, including the straight-laced eldest sister Stella, who rejected her mother and sisters’ rebellious ways to be a conventional high-society wife.  The other Stettheimer women distrusted traditional marriage and chose to focus on their creative pursuits.  Carrie dedicated her life to assembling a monumental dollhouse complete with a miniature of Nude Descending a Staircase, specially made for her by the artist, her close friend Marcel Duchamp.  Baby sister Ettie was an avant-garde novelist and philosopher.  Florine, the artist of the family, is the languishing hottie in the bottom left.  A neglected cat scratches at her hand.  Rosetta’s massive birthday cake blazes in front.

Florine paints herself and her sisters with the peculiar ageless quality typical of her portraits.  They were well into middle age by the time this was painted, but they appear as beautiful young women, decked out in the height of Jazz-age fashion.  Despite their idealized youthfulness, the Stettheimer sisters are unique characters with individualized dressed reflecting their personal senses of style.  Heat has an quirky cult following in the fashion world, including a special designer collection of clothes and accessories inspired by the painting on Etsy.

But given the summer heat shown in this painting, I think she’d be willing to ditch a few layers in an attempt to cool down. Then again, Stettheimer was totally obsessed with fashion so maybe she would forgo her artwork before her clothes. You are what you wear, after all.

Some may call it shallow, but I’m sure she would call it fabulous. Stettheimer came from some serious money and never really had a job, so instead she would pass her days by painting, shopping, and lounging around. Rough life. In this painting though, the lounging is not by choice. Stettheimer lived in Manhattan, and as most of us know, New York summers can be brutally hot. The muggy, oppressive heat has gotten the better of these high-class ladies.

The five women in this painting are Stettheimer herself (getting mauled by the kitty at the bottom), three of her sisters, and her mother at the top. This painting was made to commemorate her mother’s birthday, as we can see from the cake at the bottom of the painting. This is not what I imagined a party for the wealthy would be like. Where are the butlers, the fabulous partygoers, the Cristal? Maybe the heat was just too intense to put on the façade of the elegant socialite, but Paris Hilton would be ashamed.