More about Elizabeth Murray (1626–1698), Lady Tollemache, Later Countess of Dysart and Duchess of Lauderdale with a Black Servant

This prideful 17th-century Scotswoman had a string of insulting titles and epithets a mile long, and earned every one of them.  Her own biographer described her as “a daughter of Satan.” "Duchess of Bad Water Pressure" might also apply, considering that unforgivably flat hair.

Murray's father was William Murray, whipping boy to King Charles I.  Since laying hands upon the Royal Person was a no-no, whenever young Charles was naughty, little William got to take his beatings.  Not surprisingly, William later repaid this dubious honor by selling royal secrets to the King’s enemies.

Elizabeth preferred to commit her treason as a double agent, using her god-given double assets. As the English Civil Wars raged, she married Sir Lionel Tollemache, whose political neutrality put her in the perfect to play both sides. When the puritan tyrant Oliver Cromwell ousted the monarchy, she was rumored to have bedded him to obtain government secrets! Her political rivals accused her of witchcraft, a favorite method of sexists for disposing of uppity women. She also used her (sexual?) influence over Cromwell to prevent the execution of another lover, John Maitland. Feminine wiles, indeed.

John became her second husband after King Charles II was restored to power.  They married just six weeks after his first wife’s death, leading many to gossip that there’d been a little hanky-panky while she was still sucking air.  John was an ugly man who had a habit of spitting on people when he talked, but he was a lot of fun. He acted as the King’s pimp, aiding him in sexual dalliances. Once, when he was perhaps unable to procure a desirable wench, he dressed in women’s clothes and danced for the King’s amusement. So he was also the official royal drag queen!

While John was pimping and cross-dressing for the King, Elizabeth was busy extorting taxpayer money to support their extravagant lifestyle.  As finances dwindled and John grew fat, the marriage went sour.  When John took ill, Elizabeth convinced him to drink the waters of Tunbridge Wells (a popular health spa), though everyone warned the tainted waters would surely kill him. John had the good manners to die quickly…much cheaper than divorce.

This painting suggests that owning human property was among Elizabeth’s many vices.  It is a strong testament to the bias of Western History that we know so much about the notorious Lady Murray, yet we don’t know the name of her African slave, or if he even existed.  What we do know is that Elizabeth Murray was just 300 years and a pair of go-go boots away from being the bad girl in a James Bond film.

Elizabeth Murray (1626–1698), Lady Tollemache, Later Countess of Dysart and Duchess of Lauderdale with a Black Servant is mentioned on our blog - 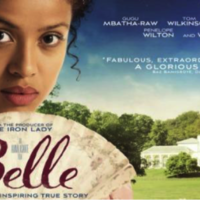 We Are No Better in Paintings
…one film that got lost in the shuffle stateside was Belle, an unlikely corsets-and-crinoline epic…
Sign up
Forgot Password