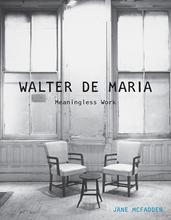 360° I Ching / 64 Sculptures is probably the world’s most expensive fortune reading.

Nobody knows what it cost but just the plane tickets between the four places it’s been exhibited (Centre Pompidou in Paris, Stockholm, Japan, and Dia:Beacon) could get you a seat in front of a fortune teller for months.

OK, I kind of lied. 360° I Ching doesn’t tell your fortune, it tells every fortune that has or will ever exist. The wood patterns form every single possible hexagram outlined in the I Ching, the Chinese Book of Changes. Which theoretically means that this piece contains all of the answers you’re looking for, but is of course, as helpful as knowing that we’re all made of stardust when you’re in the middle of a breakdown in fetal position on the tile floor of your bathroom.

Meaninglessness is De Maria’s favorite thing, he wants you to wade through the cosmic muck of experience because physical and metaphysical chaos are art. See, you probably didn’t even know that you’ve been a conceptual artist since your first tantrum when you realized that you can’t control your mother’s behavior every waking second. Congrats though!

Kinda weird for an American guy from San Francisco to be getting paid money to basically reprint a Chinese text inside of a gallery. De Maria had some pretty suspect (and by suspect I mean Orientalist) views of “Eastern societies.” He was pretty sure that California’s superiority over New York was entirely due to Asian influence and “strange religious cults.” (Heaven’s Gate? anybody?)

He’s not getting any cred for accessing “ancient” or “mystic” wisdom of the “east” here though. Mostly it just looks like he has out of control OCD and had an episode with a bunch of painted white sticks. De Maria would strongly object to any kind of diagnosis with an acronym because of the whole hatred of meaning thing. Also he might object to a diagnosis because given what being alive is like, mental health issues seem like perfectly rational, healthy response.