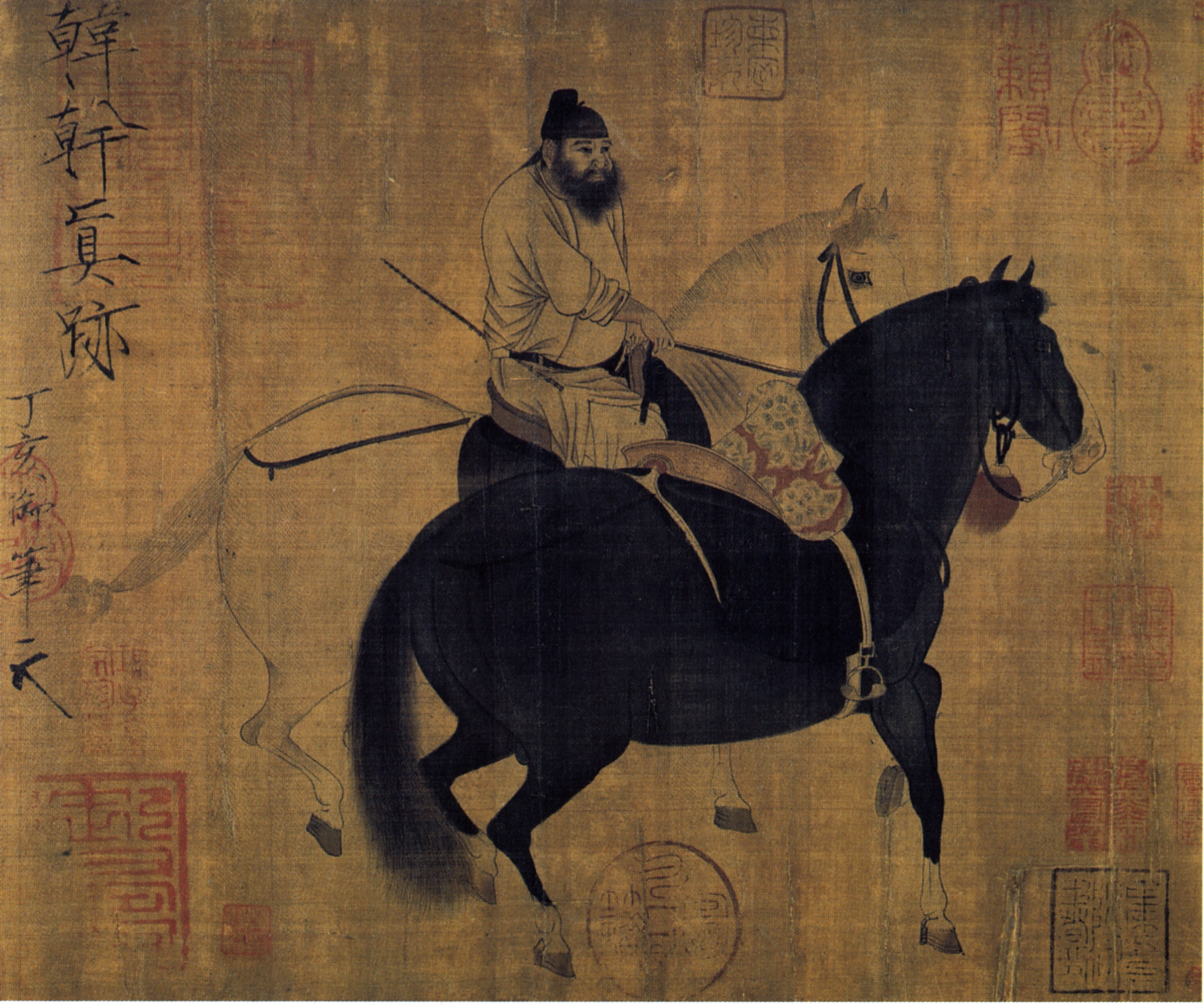 Han Gan has a crater on Mercury named after him.

Han Gan was the most famous horse painter of the Tang Dynasty.

He also made portraits and paintings with Buddhist themes, but horses should be the first thing to come to mind when you think of the name “Han Gan.”

Born in 706 in Daliang, now called Kaifeng, he learned his trade under the tutelage of Cao Ba, a court painter who also specialized in depictions of horses.  He came under the spotlight when Wang Wei, a prominent poet and painter of the Tang, observed him drawing figures in the sand and became impressed by Gan’s skill.  This event subsequently led to being commissioned by Emperor Xuanzong to create his most famous painting, Night-Shining White.  At the time, Central Asian horse breeds were just being introduced to China. Their aggressive dispositions and larger frames left many Chinese in awe, likening them to celestial steeds of myth that breathed fire and dragons in equine form.  Gan captured the power of these myths surrounding Xuanzong’s steed, earning the satisfaction of not only the Emperor, but the rest of the empire.

Along with his confident strokes and careful composition, Han Gan’s work was also recognizable by how true to life his depictions of horses were at the time. He observed horses in the stables to best capture their likeness instead of relying on the works of earlier horse painters.

His affinity toward painting horses continued in later dynasties through Li Gonglin’s work in the Song Dynasty and Zhao Mengfu’s work in the Yuan, centuries after Han Gan passed into history.  A crater on Mercury bears his name, surrounded by the names of famous painters, composers, poets, and authors on the planet’s barren surface. Imagine his disbelief and joy if he lived to this day, learning his name had a place amongst the heavens.

Here is what Wikipedia says about Han Gan

He came from a poor family in either Chang'an, modern-day Xi'an, Shaanxi; Lantian, modern-day Shaanxi; or Daliang, modern-day Kaifeng, Henan. As a young man, Han Gan was recognized by Wang Wei, a prominent poet, who sponsored Han in learning arts. Han became a student of Cao Ba, a court painter. After his studies, Han became a painter in the Tang court.

Han painted many portraits and Buddhistic themed paintings during his career; however, he is most widely remembered for his paintings of horses. He was reputed to have "learned from the horses in the imperial stables" and to be able to not only portray the physical body of the horse, but also its spirit. His reputation rose and surpassed that of his teacher. Horse painters of later generations studied Han.

He is honored with a crater named for him on Mercury.

Check out the full Wikipedia article about Han Gan

Han Gan is a really famous painter from China, and most of his works are collected in Taiwan Museum. I've compared some Chinese painter, most of them were pretty poor before they became famous, and horse is a really hot topic for them to draw.